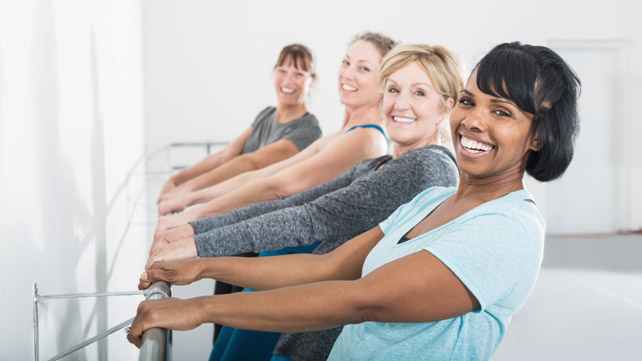 It’s a common struggle: a woman approaching her 50s suddenly finds herself gaining weight, even though she is still eating the same thing she always has and working out just as hard. Conventional wisdom says that menopause renders weight gain inevitable and weight loss nearly impossible. However, this just isn’t true.

If you find yourself gaining weight or unable to lose weight during or after menopause, begin by taking an honest look at your diet. The chances are that you are consuming more calories than you need or consuming too much sugar (usually in the forms of sweetened beverages and desserts). Dietary changes that make it easier to lose weight after menopause include eating less sugar, eating fewer fried foods, adding more fish to your diet, and eating out less often. Adding more fruits and vegetables and decreasing your consumption of meat and cheese can also make it easier to lose weight and maintain your weight loss.

The key when making dietary changes is to make realistic changes that you can maintain long-term. You might not be able to avoid eating in restaurants, for example, but you can make lower-calorie choices, such as choosing fish and steamed vegetables over dishes with more fat or sugar. Another important long-term lifestyle change to make is adding regular exercise to your routine. Virtually everyone who loses a significant amount of weight and keeps it off for a long period of time reports that he or she has done so by consistently eating less and exercising more.

Consider the fact that Japanese women are much less likely to gain weight during menopause than women in most other countries, and this is probably due to their healthier diets. Japanese women tend to eat more vegetables, fruits, and fish, and less meat, sugar, and fast food than Australian women. Japanese women also live longer than women anywhere else in the world (on average, 88 years). Their healthy diets are likely a major contributor to their longevity.

Weight gain after menopause is not inevitable. You can take control of your weight at any age with the right diet and exercise routine.